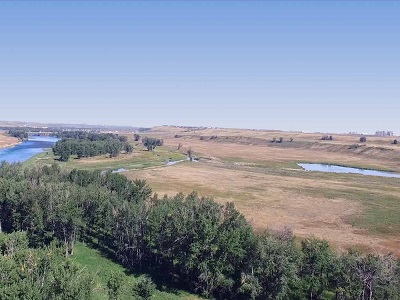 As reported in the Calgary Sun, a council committee has agreed to a developer request to relax rules requiring a minimum amount of public access to a scenic bluff on former ranchland poised to be redeveloped in southeast Calgary.

The 1,500-acre area known as Ricardo Ranch, the former 1888 homestead of William Crawley Ricardo who was one of the founders of the Calgary Ranchmen’s Club, is among the last remaining undeveloped areas along the Bow River in the city’s southeast.

A proposed development on the site from landowners Brookfield, Genesis and the Soutzo family could eventually see 16,000 to 20,000 people living in four new neighbourhoods south of Seton.

City staff recommended a policy targeting 35 per cent of the land along a scenic bluff on the site north of the Bow River be set aside for public access, through a combination of streets open to the escarpment (known as a “single-loaded street” with houses only on one side), parks, walkways and publicly accessible commercial space.

But proponents of the project complained to council’s planning committee Wednesday that the city’s rules requiring a specific amount of open space and single-loaded streets were too onerous, and restrictions would prevent them from building a sufficient number of “premium” lots backing directly onto the escarpment.

One estimate, provided by the developers, suggested the 35 per cent requirement could cost the project $148 million in revenue, and result in a $543,000 annual hit to municipal property taxes.