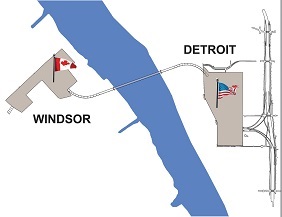 The Government of Canada is making investments that will help create good middle-class jobs, promote trade and productivity, and grow the economy. The Gordie Howe International Bridge will support economic growth by improving connections between Canada and the U.S., enabling the continuous flow of people and goods through a safe, secure and efficient Windsor–Detroit trade corridor.

The Honourable Amarjeet Sohi, Minister of Infrastructure and Communities, today announced Mr. Bryce Phillips as the new Chief Executive Officer (CEO) of Windsor-Detroit Bridge Authority (WDBA). The appointment was made following an open, transparent, and merit-based selection process that attracted a range of talented and experienced Canadians from across the country. Mr. Phillips replaces Mr. André Juneau, who has been serving as interim CEO of WDBA since December 2017.

Born and raised in Windsor, Mr. Phillips earned a Bachelor of Mechanical Engineering from the University of Windsor. With over 35 years of wide-ranging experience, he most recently served as the Vice President of Kinectrics. Prior to this, Mr. Phillips held key leadership positions at the Darlington Nuclear Generating Station.

Mr. Phillips joins WDBA at an exciting time for the Gordie Howe International Bridge project. WDBA’s procurement process is proceeding well, with significant milestones approaching in the coming weeks. Advanced construction activities in the U.S. are set to begin this summer, and the official construction start of the new bridge will begin later this year.

“The Government of Canada is committed to the successful completion of the Gordie Howe International Bridge. I am very pleased to announce Mr. Bryce Phillips as the new CEO of WDBA. He will be an effective leader of the corporation while ensuring the success of this critical, bi-national infrastructure project.

At the same time, I would like to thank Mr. André Juneau for his dedication and expertise during the time he served as interim CEO. His leadership has been integral to the significant advancement the project has made during this last year.”

The Honourable Amarjeet Sohi, Minister of Infrastructure and Communities

With 35 years of experience as an executive, Bryce Phillips’ career encompasses an increasing scope of responsibility and range of functions. He has broad expertise in leading highly technical subject matter experts, from those in managerial positions to vice presidents of large engineering and operations departments.

Mr. Phillips most recently served as Vice President of Kinectrics where he oversaw major infrastructure projects for a broad range of clients in North America and in Europe. Prior to that, Mr. Phillips was Vice President of Technical Support Services for AMEC, a company providing nuclear safety solutions for nuclear power plants worldwide.

Mr. Phillips also served in key leadership positions at the Darlington and Pickering Nuclear Generating Stations, including Operations Manager, Plant Manager, Deputy Vice President and Senior Vice President. Among his many accomplishments, Mr. Phillips worked with the board of directors and led his team to achieve the Institute of Nuclear Operations Excellence Award for quality and safety, a first in the world for a four-unit nuclear facility.