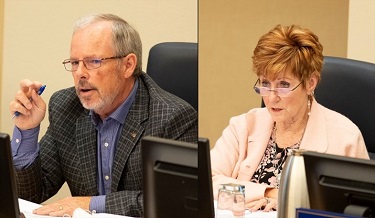 A pair of city councillors took the stand in the $28.5 million Inzola lawsuit against the City of Brampton, revealing they believed the tendering process for the City Hall expansion was fraught with bias from former mayor Susan Fennell and senior staff.

Wards 1 and 5 councillors Elaine Moore and Grant Gibson, were in Orangeville court Wednesday (May 16) and Thursday (May 17) under a plaintiff subpoena to offer testimony about the contcontroversial oversial 2009 request for proposal (RFP) process for the now-completed nine-storey City Hall West Tower expansion.

In its suit, Inzola owner John Cutruzzola, is claiming the city was biased against them and wrongfully disqualified his firm from bidding on the project. The city claims Inzola was disqualified for violating the rules of the RFP process.

While under oath, Moore and Gibson claimed Fennel and others actively sought to withhold information about the proposals from some councillors to the benefit of Dominus Construction, which was eventually awarded the project.

In one email exchange from Feb. 19, 2011, presented by the plaintiffs in court, Moore asked then CAO Deborah Dubenofsky that a special meeting of council to vote on the winning bid selected by staff not be scheduled while she was away on vacation.

In another email exchange revealed in court, when Dubenofsky forwarded Moore’s request to the mayor, Fennel suggested the meeting be scheduled while Moore was away.

Moore didn’t find out about that email until it became part of the document discovery process.

“It was a validation of what I expected,” Moore told court, referring to her suspicion she and others were purposefully being kept out of the loop.

At the time, Moore and Gibson were both critical and had concerns about the rarely used “competitive dialogue” RFP process employed by city staff for this project, believing it did not provide councillors with enough information to properly execute their duties.

Keep reading in the Brampton Guardian