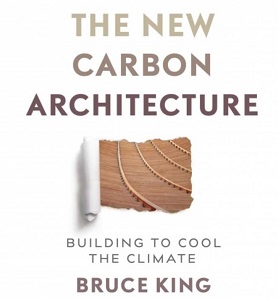 This book makes the convincing case that we have to change the way we build, that it is no longer enough just to save energy.

French mathematician and theologian Blaise Pascal once wrote “Je n’ai fait celle-ci plus longue que parce que je n’ai pas eu le loisir de la faire plus courte,” loosely translated as “I’m sorry I wrote you such a long letter; I didn’t have time to write a short one.” In the introduction to his book The New Carbon Architecture, Bruce King writes:

This could have been a much bigger book. It might have been a 400 page tome fully reporting the state of the art with tables, graphs and other hallmarks of good science, or it could have been shaped as an academic textbook. But it seemed better to get the idea out into the world, as simply and readably as possible.

So he rounded up some of the best minds in the business, “and it took some persuading to get them to provide just the ‘elevator pitch’ summaries of their respective work in their respective fields.” They certainly delivered more than just elevator pitches; they add up to “a collection of useful essays sketching a new palette of materials for a new century.”

Net-Zero buildings that use less energy than they generate are a good start, but don’t go nearly far enough; here we point out how to design and build truly zero carbon buildings — the New Carbon Architecture.

King also calls this new architecture “building out of sky”– stuff that comes from the sky like carbon from the CO2 in the air, sunlight, and water — which, through the process of photosynthesis, are turned into plants that we can turn into building materials. I have described the same idea as building out of sunshine. These are the materials that are truly zero carbon or carbon negative, actually sucking it out of the atmosphere.