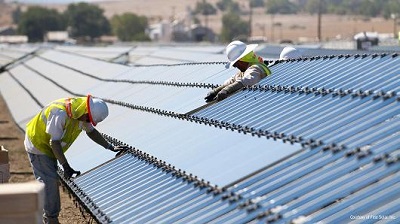 Billions in US solar projects shelved after Trump panel tariff

President Donald Trump’s tariff on imported solar panels has led U.S. renewable energy companies to cancel or freeze investments of more than $2.5 billion in large installation projects, along with thousands of jobs, the developers told Reuters.

That’s more than double the about $1 billion in new spending plans announced by firms building or expanding U.S. solar panel factories to take advantage of the tax on imports.

The tariff’s bifurcated impact on the solar industry underscores how protectionist trade measures almost invariably hurt one or more domestic industries for every one they shield from foreign competition. Trump’s steel and aluminum tariffs, for instance, have hurt manufacturers of U.S. farm equipment made with steel, such as tractors and grain bins, along with the farmers buying them at higher prices.

White House officials did not respond to a request for comment.

Trump announced the tariff in January over protests from most of the solar industry that the move would chill one of America’s fastest-growing sectors.

Solar developers completed utility-scale installations costing a total of $6.8 billion last year, according to the Solar Energy Industries Association. Those investments were driven by U.S. tax incentives and the falling costs of imported panels, mostly from China, which together made solar power competitive with natural gas and coal.

The U.S. solar industry employs more than 250,000 people — about three times more than the coal industry — with about 40 percent of those people in installation and 20 percent in manufacturing, according to the U.S. Energy Information Administration.