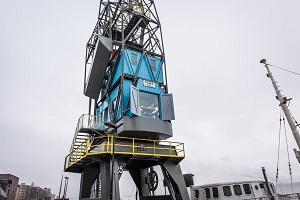 Yays Concierged Boutique Apartments, working with designer Edward van Vliet, has turned a late 1950s harbor crane in Amsterdam’s Eastern Docklands into a novel serviced apartment that sleeps four. The project makes use of the original crane operator’s huts, and offers a great view of the surrounding area.

Its history, as told by Yays, is pretty interesting. Following the bombing of the original Eastern Docklands harbor cranes during World War II, the Royal Dutch Steamboat Company commissioned replacements, which were used until the 1970s. The site was eventually turned into a residential area and those replacement cranes were all demolished, save one: the Figee 2868 pictured, which was built in 1958.