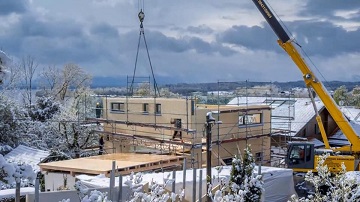 With 3D modeling, additive manufacturing, and digitized construction processes becoming more advanced and more accessible, construction could become more about assembling constituent parts than creating something on-site. This article will conclude the series on robotics and automation in the construction industry, and you can find parts one and two here.

Manufacturing has been the most prominent adopter and beneficiary of automation over the last ten or twenty years. From being a fragmented, disjointed industry known for horrific working conditions, the manufacturing industry has become a consolidated, efficient machine, with seamless production processes and integration between departments. This is, of course, thanks to data that connects every part of the chain, from original 3D models through to warehousing and delivery. This sort of uninterrupted data flow could transform the construction industry massively, bringing about the same kind of sea change seen in manufacturing and bringing the industry wholly into the 21st century. In a roundtable discussion at Autodesk University 2019, Autodesk CEO Andrew Anagnost continually compared the interlinked sectors of architecture, engineering and construction (AEC) to manufacturing, saying that “there’s so much opportunity to increase productivity in the [AEC] space. 50 years ago manufacturing was just as disorganized as construction is now, and AEC is following the same trajectory [as manufacturing].”

Construction could also benefit from being a latecomer to the automation party, starting at a point where digitization has already infiltrated the industry, and processes are already quite uniform globally. As Anagnost states: “As it is in manufacturing, each country has its own aesthetic variations but the processes underneath are all the same.” Acting as a little brother to the manufacturing industry might not be such a bad idea for construction, lending processes and technologies from the more advanced automation of manufacturing and reaching a point where “general contractors are going to become manufacturers, [and] manufacturers are going to realign some of their processes to feed [construction],” predicts Anagnost. This kind of cross-collaboration and moving between markets is a common theme when it comes to automation, and it seems likely that construction will follow the same formula as it undergoes its own transformation.