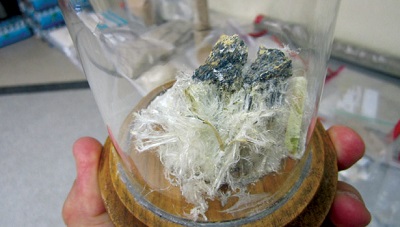 Asbestos might be making a comeback thanks to Trump’s EPA

Asbestos, a dangerous carcinogen outlawed in more than 55 countries, could make a comeback in the United States, under Trump’s Environmental Protection Agency. The EPA has even made it easier for companies to introduce new uses of asbestos-containing products in America—many of which could end up in common products in your home, as well as the materials used to build it.

While products derived from asbestos may not hold a direct threat to consumers, the environmental advocacy group Healthy Building Network tells Fast Company the health risks are significant for workers who mine the toxic material, as well as those who handle it in industrial facilities that import it. Surrounding neighborhoods where asbestos fibers may be released into the air, as well as those in proximity to the landfills where they may ultimately end up, are also affected. People in the building community, who are exposed to the fibrous material while renovating and constructing our homes, schools, and offices, also remain at risk.
Click here to sign-up and receive the Weekly Round Up in your inbox every Saturday

Once touted as a “magical mineral,” asbestos carries heat, electricity, and chemically resistant properties that made for common applications in a wide range of manufacturing materials, and especially building insulation, before knowledge of its grave health risks caused many countries to ban its use in the 1970s.

Today, asbestos exposure is irrefutably linked to illnesses including lung cancer and mesothelioma. While the U.S. has restricted use of the material over the years—most notably with the EPA’s 1973 Clean Air Act and 1989 Asbestos Ban and Phase Out Rule—it remains one of the only developed nations that has still not banned it outright, in a clear ongoing tussle between corporate and public interest. New data released this year shows asbestos-related deaths in the U.S. total nearly 40,000 annually, more than double previous estimates of 15,000.

On June 1, the EPA enacted a “SNUR” (short for Significant New Use Rule) allowing the manufacture of new asbestos-containing products to be petitioned and approved by the federal government on a case-by-case basis. Under an amendment to the 1976 Toxic Substances Control Act (TSCA) that passed in 2016, during the Obama administration, asbestos also remains one of ten prioritized substances currently being evaluated by the EPA.