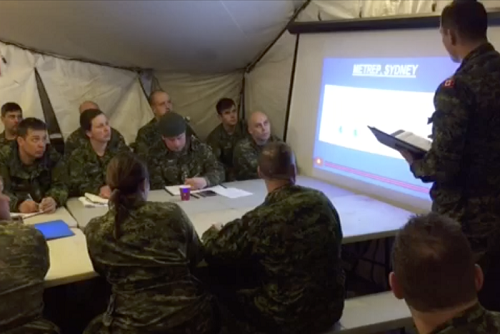 A force of 500 soldiers from the 4 Engineer Support Regiment is carrying out a major restoration on the Fortress of Louisbourg National Historic Site in Cape Breton starting Monday as part of Exercise Nihilo Sapper 2017.

The troops out of Gagetown will be restoring the Siege Corridor, the historic pathway used by British soldiers to attack the French fortress in the 1700s, as well as building a bridge over nearby Freshwater Brook with help from Parks Canada archaeologists.

Combat engineers are also repairing the St. Alphonse Church in Victoria Mines, including a roof replacement, together with the local Stone Church Restoration Society.

Construction of roads and critical infrastructure are part of the responsibilities the regiment has within the military. The Louisbourg siege trail and the stone church restorations allow the soldiers to practice these skills, explained Lieutenant-Colonel Chris Cotton.

However, they will not only learn and practice their skills on these historical restorations. As combat engineers they must be also ready to do this in a wartime setting. For those in Cape Breton, they will work as if they are in hostile territory infested with roadside bombs and under the threat of attack.

This is in keeping with 4 Engineer Support Regiment’s traditional role, which is building facilities such as camps and roads to support Canadian military operations, from fighting insurgents abroad to providing disaster relief at home.
Before deploying in Louisbourg and elsewhere, soldiers built a 500-person camp near Sydney’s Open Hearth Park, complete with heated tents housing sleeping quarters, showers, a kitchen and a mess hall, medical tent, command post and a vehicle refueling post.

Soldiers have also built smaller forward operating bases in off-site training areas around Cape Breton, as they would on foreign deployments.