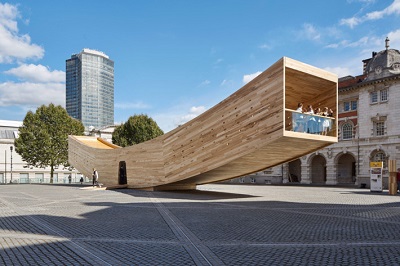 Architecture – What would a world designed by women look like?

As blogged in The Cut, the world you inhabit was designed mostly by men. For thousands of years, the virtually all-male profession of building has excelled at producing temples, fortresses, cathedrals, castles, stadiums, skyscrapers, highway interchanges, and imposing government centers — buildings that women often use with subliminal frustration. Thermostats that regulate temperatures for office workers in jacket and tie, double doors that require a manly shove to open, airport security scanners with conveyor belts too high to hoist hand luggage onto, inadequate public restrooms, parking garages to delight the lurking rapist — all these aspects of urban life seem studied for the inconvenience of women. Nearly 40 years ago, in an essay titled “What Would a Non-Sexist City Be Like?” the urban historian Dolores Hayden argued that traditional zoning effectively confined women in single-family houses, physically separated from the work world by impossibly long commutes. (She advocated communal living, higher densities, and neighborhoods that jumbled workplaces and residences — in a word: Manhattan.)

To put Hayden’s question another way: What will cities be like when there are more women designing them? We are finally starting to find out. Women are scarce in the profession’s upper echelons, but they make up more than 40 percent of architecture-school graduates. Like so many parts of the work world, architecture is belatedly grappling with a legacy of discrimination. The evidence is simultaneously infuriating and encouraging. The organization Equity by Design, which conducts a biennial survey, found that the longer women stay in the business, the less they are paid relative to men. An editorial in Architectural Record called for a #MeToo reckoning that has so far not materialized. The Beverly Willis Architecture Foundation is trying to reclaim the distinguished female practitioners that were written out of history. And the #MeToo tsunami has finally hit the design world: after five women accused Richard Meier, the guru of white steel and glass, of sexual harassment, Sotheby’s, the Getty Center, and Cornell all un-personed him overnight. More may be coming: A Shitty Architecture Men list, a spinoff of Shitty Media Men, is making the rounds.

Keep reading in The Cut