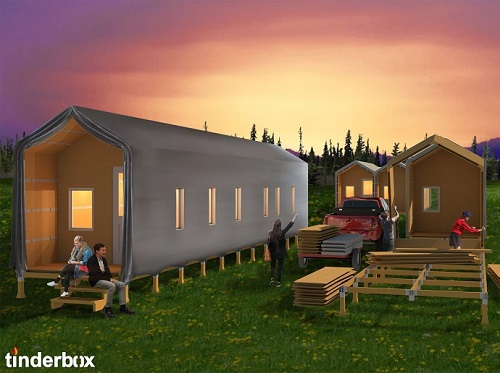 An architecture student is developing shelters for families displaced by Canadian wildfires.

Victoria McCartney came up with the concept for Tinderbox Wildfire Shelter Kits, which are easy-to-build shelters that communities in crisis can use as temporary homes.

The project could help reduce overcrowding in community shelters during natural disasters, said McCartney, a master’s student at Carleton University in Ottawa.

“I noticed that there’s a problem with how we respond to Canadian wildfires,” she told CBC’s Radio Active Tuesday.

“I really wanted to act upon that, and sort of create a response to that issue through architecture by introducing these shelters.”

The modular flat pack shelter kits can be built by two adults in one day, said McCartney.

When the shelter is no longer needed, it can be packed up, loaded onto a truck and moved to the next community that needs it.

McCartney is crowdfunding to raise money for a test model. She hopes to develop small prototypes over the next few months.

More than 80,000 people were evacuated from Fort McMurray during the 2016 wildfire. Thousands of those people lived in community shelters while they waited to return home.

Many Fort McMurray evacuees had a hard time finding a bed during the first days of the fire. Oilsands camps filled up quickly and community shelters were crammed.

“These environments often are overwhelming … for families who are experiencing natural disasters,” she said.

She added that minimal sanitation and cooking facilities are also drawbacks to housing evacuees in community shelters. “It can really cause heightened stress.”

A little privacy can help reduce the stress associated with these spaces, McCartney said. Tinderbox would supply evacuees with furniture, power, a kitchenette, toilet and shower.