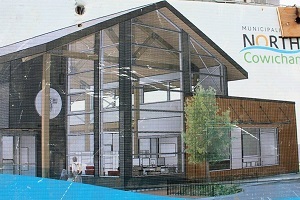 Architects taken to task for design changes at Chemainus library

Gulmatico is the senior architect for the Vancouver Island Regional Library’s new $2.7-million library under construction at 9796 Willow St. in downtown Chemainus.

He was referring to the decision by his company, which was contracted by the VIRL to design and oversee construction of the library, to undertake “value engineering” to change some of the agreed-upon designs of the facility to reduce construction costs after the company discovered the project was over budget, and then not to consult with the municipality on the changes.

Once the proposed changes were brought to the attention of the municipality, further construction on the unauthorized works was ceased until the matter was presented to council and decisions on the changes were made.

North Cowichan authorized a development permit for VIRL’s long-anticipated library, which saw construction begin last March, after community consultations on what the public wanted in the new facility and what it should look like.

The approved design for the south-east corner of the building included glazing over a large area, extending from near the base of the building up to the eave line of the structure, and the company’s proposed cost-saving amendment significantly reduces the overall level of glazing that was part of the original design.

The second proposed design change is the removal of a planned canopy on the Willow Street elevation of the building.

Gulmatico said that the primary purpose of the canopy was to provide weather protection for a multi-media panel that was to be constructed to allow visitors to locate the community’s many murals.

He said that once the plan for the panel was cancelled, the company saw no need for the canopy and that plan was also scrapped to save costs.