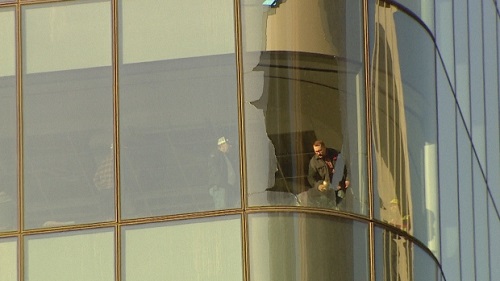 Architect: Skyscrapers’ falling glass in Calgary could be prevented with stricter standards

Calgary should consider new safety standards for attaching windowpanes to skyscrapers in the wake of several cases of glass shattering on the streets below, says an architect and professor.

A pane of glass fell from the corner of the 23rd floor of Brookfield Place on Sunday morning, smashing on the pavement.

Two weeks earlier, a window-washing crew broke a window on the same building. The broken glass forced bus and C-Train routes to divertaway from the tower.

No one was hurt in either case.

Many European countries have rules requiring that glass panes be mechanically secured to skyscrapers to prevent them from falling during strong winds, University of Calgary architecture professor Maurico Soto Rubio told the Calgary Eyeopener on Tuesday. He spoke with host David Gray.

Q: We don’t know exactly what happened downtown. There were high winds that day, so of course that’s the speculation, that it was a wind thing. Is it possible for wind to rip out a part of glass from a skyscraper?

A: Absolutely. This is a well known issue that we architects have been dealing with for the last, you know, 50 years or more. Wind speed actually increases drastically, exponentially with height.

Every time in the City of Calgary when we hear that we can have gusts of winds of up to, let’s say, 100 kilometres per hour, that’s really at ground level. That’s really what we experience in, let’s say, the first 10 metres. But as we go higher, that wind speed is increasingly, exponentially higher. It can be twice as much.

Q: You could have 200 kilometres howling wind 200 metres above the street?

A: Absolutely. Something important to understand is that wind can create not just wind pressure, positive pressure pushing on a building, but we can also have suction. Some of this negative pressure can, in fact, suck window panels out of the frames.