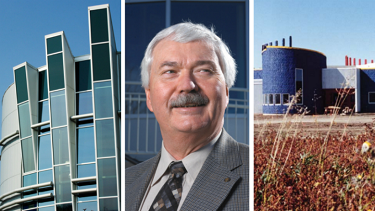 An architect who designed some of the most iconic buildings in Calgary and southern Alberta has died at 74 from asbestos exposure he incurred during the early years of his career.

Ken Hutchinson designed hundreds of buildings in Western Canada, including the Saamis Teepee in Medicine Hat and the Hobbema Healing Lodge (PêSâkâstêw Centre) in Mâskwâcîs, which is built in the shape of a medicine wheel, as well as numerous other recreation centres, libraries, fire halls, theatres and schools in Alberta, B.C. and Saskatchewan.

Other notable buildings he designed include the Engineered Air Theatre at Arts Commons in Calgary, the Calgary Real Estate Board, the Museum of the Regiments, and Fort Saskatchewan’s DOW Centennial Centre.

Hutchinson was born in Red Deer and raised in Edmonton. His family said he chose to become an architect after helping his grandfather build a house as a child.

He was inducted into the Royal Architectural Institute of Canada in 2010, and there’s an architectural scholarship in the name of Hutchinson and his wife at Athabasca University.

Hutchinson won dozens of awards over his long career, heading up his own architecture firm for more than 35 years.