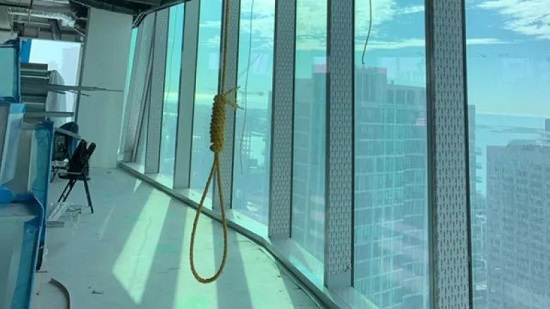 Toronto police are investigating after another noose was found hanging from a construction site on Thursday — just weeks after two nooses were found by Black construction workers on a site in East York.

Police say they are now trying to figure out whether or not the two incidents are connected. Both are being investigated as hate crimes, police confirmed to CBC Toronto Friday.

EllisDon, one of the construction companies responsible for the site, told CBC Toronto Friday that the noose was discovered inside a partially-built tower at 81 Bay St., across from Scotiabank Arena.

“Yesterday, a piece of hate paraphernalia (a noose) was discovered at a portion of the project being managed by EllisDon and Govan Brown in joint venture,” said Dustin Luchka, a spokesperson for the company.

Toronto police Supt. Michael Barsky confirmed that police were made aware of the incident on Thursday. An investigator was assigned to the case on Friday.

Barsky said the noose was found on a high floor in the building, where workers were installing heating, ventilation and air conditioning (HVAC).

The type of rope found is used to help install HVAC systems, Barsky said, adding that police have seized the rope as evidence.

Barsky said there is no video surveillance evidence and that it’s unlikely officers will find out immediately who left the noose at the site.

“I’m not sure who in the world thinks this is tasteful or the right thing to do but hopefully we’ll get to the bottom of it,” he told CBC Toronto Friday.

Meanwhile, EllisDon apologized to the workers who made the discovery and “immediately started undertaking emergency stand downs and tool box talks to condemn the actions, offer support, and ask the individual or individuals to own up to their actions,” Luchka said in a statement issued Friday.

Luchka said EllisDon and Govan Brown have launched their own internal investigation alongside police.

EllisDon also said it is offering employee assistance program services to “anyone who needs support at this time,” including sub-trade workers.