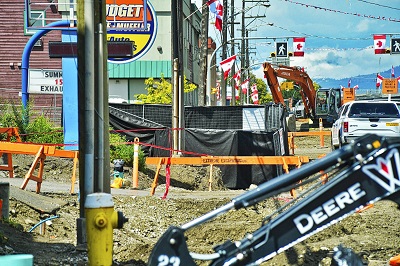 As reported in the Vernon Morning Star, a buffer zone has been set up around an archaeological site on West Victoria Street after construction crews discovered what the city is calling a “significant find” on Wednesday morning.

City of Kamloops capital projects manager Darren Crundwell told KTW the discovery of ancestral human remains dating to before European settlement was made at about 10:30 a.m. on Wednesday in the middle of the West Victoria Street reconstruction project.

It’s not the first time artifacts have been found during the construction project, which began in April in one of the oldest areas of the city. Items previously discovered include glass bottles and a portion of a tool.

However, Wednesday’s discovery is different.

He said when the remains were discovered, crews immediately stopped work. The RCMP, Tk’emlups te Secwépemc (TteS) and Golder Associates were called in to control the site and it was determined the origin of the remains are not modern.

Crundwell said the exact age of the remains is not yet known, but he said it was confirmed they date back to pre-European settlement in the area.

“They just know based on what they see that it’s not modern,” Crundwell said, noting soil is taken into consideration.

The area is cordoned off and security has been put in place at the site where the remains were found.