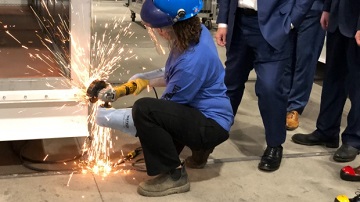 As reported on CTV News, the province is increasing its investment in the CAREERS: The Next Generation program, which helps connect students with employers through paid internships and apprenticeship programs in the skilled trades.

Premier Jason Kenney announced the expansion Monday at a local manufacturing facility.  The program’s funding will be tripled to $6 million a year by 2022/23.

“A young, well-trained and mobile workforce will be key to our future success,” Kenney said. “This will provide more young Albertans with more access to invaluable hands-on work experience and help them make connections with employers.”

The investment will double the number of schools involved with CAREERS and will help provide 6,000 students access paid internships and training each year.

Kenney said developing the skills of young people is one of his government’s highest priorities and is part of the broader ‘skills for jobs’ strategy.

Nearly 20,000 skilled trades workers are expected to retire over the next five years, according to the government.

“It’s important for us to take action now, and invest in our youth, to provide them with the skills and training to connect them with in-demand, good paying careers,” Nicolaides said.

CAREERS: The Next Generation was founded in 1997 and has helped 27,000 students across Alberta obtain paid internships and mentoring opportunities in the skills trades.

The province announced it was cancelling the Summer Temporary Employment Program (STEP) in last week’s budget. That program provided subsidies to businesses who hired students for summer work.