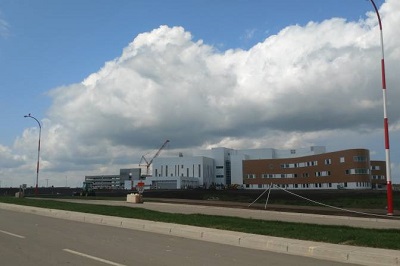 Months after the Grande Prairie Regional Hospital was set to open, a notice of default has been issued to the contractor responsible for its construction.

The Alberta government said Monday that Graham Construction and Engineering is in default of its contract to finish the hospital, and the management firm has been given 15 days to present a plan to get the construction back on track in accordance with the contract.

Failure to do so will result in the construction firm being terminated, the government said in a news release.

“This is a very serious step and not something we are doing lightly,” Infrastructure Minister Sandra Jansen said.

“We have worked closely with the construction manager to resolve the issues but the bottom line is simply that the hospital is not progressing as it should.”

The hospital contract was awarded to Graham Construction in July 2011 under the former Progressive Conservative government and construction got underway in 2014.

Since then the project has been plagued with delays, and in November 2015, was already $89 million over budget. The delays and soaring costs were attributed to poor planning ahead of site preparation and higher than estimated costs for electrical and drywall work.

On top of the delay, Jansen said Graham Construction asked earlier this month for an extra $120 million on top of its existing $510-million contract.