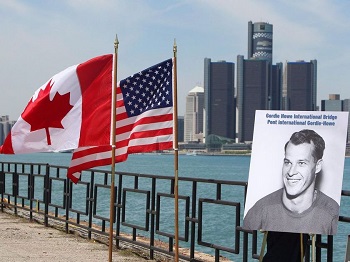 A Canadian construction company that came under scrutiny for its ties to a Chinese conglomerate has withdrawn from a team bidding to build the Gordie Howe International Bridge.

Aecon Group, a Toronto-based company, was one of over a dozen firms which joined forces to form the consortium Bridging North America in an effort to land the bridge contract from the Canadian government.

The Canadian government must approve the takeover, but it has been pending for several months while a review is underway.

The winning consortium will not only build on the Howe bridge project, but will also be responsible for operating the crossing for the next 30 years. It’s that factor which has raised concerns that a Chinese-controlled company would be privy to movement of goods and other confidential security information related to a Canada-U.S. border crossing.

But Aecon’s withdrawal will have no impact on the Bridging North America team which will continue its push — one of three short-listed consortia — to build the Howe bridge, said Mark Butler, spokesman for the Windsor-Detroit Bridge Authority, which is overseeing selection of a contractor.

“WDBA has been informed that Aecon has withdrawn from the procurement process,” said Butler on Friday.

“The Request for Proposals (RFP) allows for changes in the proponent team structure. The change has been addressed in a manner that is consistent with the RFP.”

Aecon withdrawing from the procurement process also will have no impact on the bridge authority’s schedule to select a private sector group that will design, build and operate the Howe bridge, he said.

A decision on who will build the bridge — which includes the crossing, plazas and feeder roads in Detroit to link with the I-75 freeway in Detroit — is expected to be made within the next two months.

A final contract with financial terms will then be negotiated and slated to be in place this fall with construction to be launched soon afterwards.

Keep reading in the Windsor Star