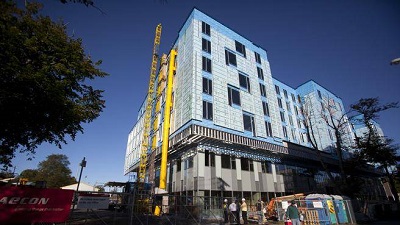 A construction company has been found guilty of violating the province’s Occupational Health and Safety Act in connection with a September 2013 mishap at a Halifax work site that left a man permanently disabled.

Aecon Group Inc. stood trial in Halifax provincial court on a charge of failing to take every reasonable precaution to ensure the health and safety of a person at a workplace.

Judge Gregory Lenehan gave his decision Monday, saying he was satisfied that as construction manager for a Dalhousie University project on Lemarchant Street, Aecon failed to ensure a swing stage or its components were properly disassembled, secured or stored.

Chris Conrod, an employee of Economy Glass, was working at the construction site on the morning of Sept. 9, 2013, when a steel beam that was being used as an outrigger for a swing stage on the penthouse roof fell more than four storeys.

Conrod was unable to get out of the way of the falling beam and was struck on the back, which caused a catastrophic spinal-cord injury. He now uses a wheelchair.

According to the evidence at trial, an employee of McCarthy’s Roofing Ltd. had taken apart and moved the outrigger on Sept. 7 to facilitate roofing work.

McCarthy’s had made two requests through Aecon to have the company responsible for the swing stage, Flynn Canada Ltd., move the outrigger, but the equipment was still in place on the morning of Sept. 7.

A McCarthy’s foreman without training in the proper disassembly of swing stages — and without permission from Flynn — unplugged the power supply, disconnected tie-back cables, removed counterbalancing weights, dismantled the outrigger and moved it out of the way.

At the end of the day, the foreman returned the outrigger to its original position on the roof but did not reassemble the cradle, weights or tie-back cables.