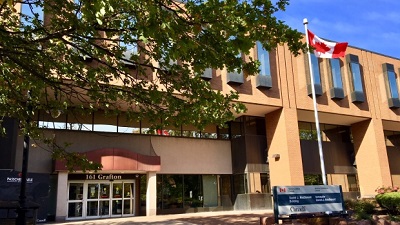 $3.3M contract awarded for the design of Veterans Affairs Canada building in Charlottetown

An architecture firm from Toronto will do the design work for a major renovation to the Daniel J. MacDonald building, the head office of Veterans Affairs Canada in downtown Charlottetown.

The renovations will include reduction of the greenhouse gases emitted by the building. Mechanical and electrical systems in the building will be replaced.

“This building was put into service in 1985, it’s about halfway through its useful life,” Casey said. “The Government of Canada has a goal of reducing its greenhouse gases by 80 per cent by 2050, so environmental sustainability in all of the key systems here will be a part of it.”

Casey said the renovations will involve updates to the entire building, from its heating and ventilation systems to cosmetic fixtures.

Casey said the government has not yet determined the overall cost for the construction phase of the project.

“The actual cost for the renewal and the construction is something that will flow out of the design work,” Casey said. “It isn’t fixed, it will be determined in part by this initial work.”

He said this will be a substantial project and he anticipates the final construction budget will be in the tens of millions.