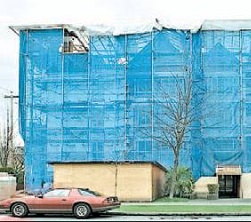 20 years later and lessons learned from the B.C. leaky condo crisis in 1998

James Balderson was thrilled when he purchased his Vancouver townhouse in 1991 — until the rain started to fall and drip through the lights in the ceiling.

“I bought a brand-new, four-bedroom, leaky, rotten condo townhouse,” Balderson said. “It was full of holes. It leaked and rotted.”

Balderson had purchased his new home in the Fairview Slopes neighbourhood — for $533,000 and change — before the words “leaky condo crisis” had been uttered in the province.

It didn’t take long before Balderson, and the media, began to notice a slew of other condo owners also complaining about the same issues.

By 2003, the B.C. Homeowner Protection Office had identified about 65,000 leaky condos across the province.

The Canada Mortgage and Housing Corporation defines leaky condos as a “catastrophic failure” of building envelopes, which lets water into the building frame and leads to rot, rust, decay and mould.

The crisis was caused by a combination of poor design and shoddy construction during a building boom. Many homeowners, suddenly facing thousands of dollars in repairs, went bankrupt. The crisis is said to have cost the B.C. economy billions of dollars.

Twenty years ago this week, the province established the Barrett Commission of Inquiry into the Quality of Condominium construction in the Province of British Columbia to look into the problem.

Experts say the inquiry provided higher home construction and design standards that persist today. But they also warn that leaky condos are still out there — and buyers should know what to look for before potentially purchasing one.