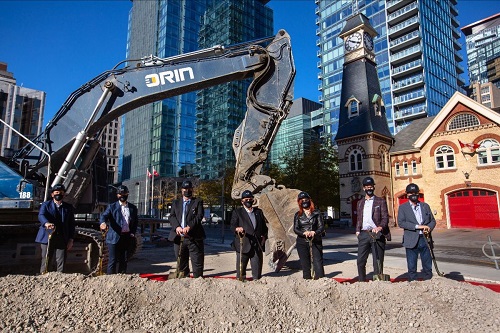 “We launched 11 Yorkville just over a year ago, and I am beyond proud of today’s momentous milestone. Yorkville is one of Toronto’s most prestigious neighbourhoods and is regarded as an iconic area on the world stage. It has been an honour to bring such a significant project to this truly special address,” says Edward Sonshine, Founder and CEO of RioCan.

Once complete, the 62-storey tower will feature 593 premium residences, best-in-class amenities, a 43,000 sq. ft. double-storey retail space, and a brand-new city parkette. Designed by Sweeny&Co, the tower pays homage to the timeless gothic architecture that was predominant among New York’s first skyscrapers in the 1920s.

Since launching the project in 2019, the developers have already sold 97 per cent of suites in this mixed-use development.

“Yorkville is renowned on the world stage for its high-end, luxury retail and restaurants alongside charming streetscapes. The neighbourhood’s new parkette will play a key role in contributing to Yorkville’s already active public realm. 11 Yorkville will leave an indelible mark on this city, and we could not be prouder of this project’s resounding success in such a short time,” says Howard Sokolowski, Chairman and CEO of Metropia.

The land assembly began in 2014 as RioCan and Metropia began consolidating their properties along Yorkville Ave., with the goal of contributing to the legacy of Yorkville. Capital Developments, who partnered with RioCan and Metropia on E2 Condos at Yonge and Eglinton, was also enlisted as a partner, creating an exceptionally robust team of industry experts.

Recognizing the need for more public space in the neighbourhood, the developers introduced a 14-metre-wide parkette designed by acclaimed Janet Rosenberg & Studio that fronts the building’s retail space, connecting Cumberland St. to Yorkville Ave. These new amenities and connections will become a fantastic addition to the public spaces in Yorkville already, including the Rose Garden and the Village of Yorkville Park.

The interiors designed by award-winning firm Cecconi Simone will bring luxurious design and comfort to all suites, offering high-end finishes as standard in all residences. Design-focused kitchens form the heart of the suites, which include a two-level black marble island with a built-in wine trough – perfect for both dining and food preparation – a wine fridge, and a marble range hood enclosure.

“Only a team of Toronto’s best developers and consultants could have envisioned such a masterful project that would stand the test of time, and 11 Yorkville delivers on that vision. It has been an honour to work alongside our talented partners, RioCan and Metropia, and to be a part of this project’s legacy. 11 Yorkville brings a true luxury experience into every detail of the building from the moment you walk through the front door,” says Jordan Dermer, Co-Founder and Managing Partner of Capital Developments.

The building provides unparalleled access to anywhere within the city and beyond, with the Yonge-Bloor and Bay subway stations just steps away. Located across the new Four Seasons Hotel & Residences, 11 Yorkville is surrounded by the city’s top retail, dining and cultural institutions, including the ROM, The Gardiner Museum and UofT.

About Metropia
Metropia is a Toronto-based real estate developer of master-planned communities and condominiums across Canada. Building on Founder, Chairman & CEO Howard Sokolowski’s four decades of industry experience, Metropia’s expertise covers every facet of the development industry including award-winning customer support. The pursuit of superior quality, innovation and excellence is reflected in their design, living spaces, amenities and coveted communities. Committed to growth and their visionary future, Metropia is inspired to change skylines and build communities, while redefining the meaning of home.