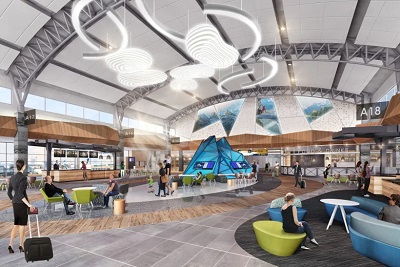 As reported on CBC News. Change. It’s all that seems to happen at YYC.

In recent years, the Calgary International Airport has opened a new runway and cut the ribbon on a new international terminal, doubling the size of the entire facility.

While presenting the airport authority’s annual report to city council on Monday, CEO Bob Sartor said the changes will just keep on coming.

For example, this spring construction will get underway on two new interchanges that will ultimately help give drivers quicker access to the terminal.

But in the short term, that construction might make things tricky.

“There’s going to be some detours,” Sartor told reporters after the meeting.

“Communication with the community will be essential so that people understand ahead of time what to expect when they’re coming to the airport.”

The city, as well as the federal and provincial governments, are funding the interchange upgrades on Airport Trail at both Barlow Trail and at 19th Street N.E.

Sartor said construction will proceed on both interchanges at the same time.

The interchanges also tie into a couple of other road projects related to airport access.

The city is extending Airport Trail eastward from 36th Street N.E. to 60th Street N.E. which will allow traffic to connect all the way to Stoney Trail. The city has posted more information online about the planned construction.

In 2020, construction will also begin on a new ramp from southbound Stoney Trail to westbound Airport Trail.

All together, the three projects will cost $153.35 million.

Besides improving access to YYC, the road changes will boost Calgary’s goal of becoming more of a logistics hub. Already, Sartor said, 75 per cent of Alberta’s air cargo goes through YYC.

The improved road links to key roads like Deerfoot Trail and Stoney Trail are expected to assist goods to get moving quicker.