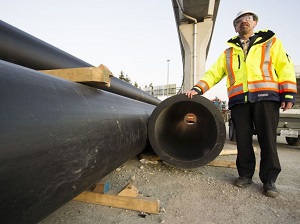 Installing one of the largest Geoexchange systems in Canada is a massive investment that is crucial to Vancouver International Airport’s objective to reduce greenhouse gas emissions, but the impressive parts of it are destined to remain unseen.

Crews have drilled 850 wells 152 metres down into the sand of Sea Island to tap the constant temperature that exists deep underground, which is the heart of geothermal heating and cooling.

At an estimated $350 million, the Geoexchange system is the single most expensive project YVR has ever taken on. CEO Craig Richmond expects to cut carbon dioxide emissions from heating and cooling by 30 to 35 per cent, compared with a baseline of 2012.

All that is visible at this point, however, is a field of white conduit pipes poking up out of the ground in neat rows where the value lot parking used to be in front of the airport’s main terminal building.

“Think of it as a gigantic radiator down underground with all these pipes either supplying the radiator with heat, or (supplying) heat back to the ground,” said Don Ehrenholz, YVR’s vice-president of engineering.

The system works, Ehrenholz said, on the principle of using the differential between the constant temperature deep underground, six to eight degrees Celsius, and the temperature at surface to either heat or cool YVR’s cavernous terminal buildings.

“So you’re using the ground as essentially a storage place for heat, if you will,” Ehrenholz said, “drawing out of that storage to heat our buildings in the winter and putting heat back into the ground during the summer.”

“As long as we balance that then it’s really good,” Ehrenholz said, “we’re never going to deplete our heat source and never going to overheat it, if we do that well.”

YVR is about a year-and-a-half into the Geoexchange project, which is a central component in a $500 million project that includes a new 2,000-stall parkade and consolidation of utilities into a central building designed to post-disaster standards.