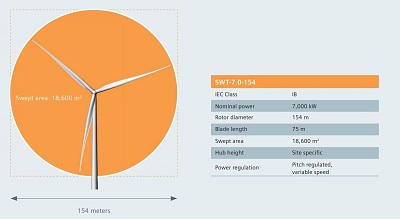 The 1.2GW project will be constructed of 174 7.0MW turbines. The turbine model being installed – SWT-7.0-154 (PDF) – is manufactured by Siemens. The site will generate 4.1TWh of electricity per year.

According to Ørsted, an 8MW turbine – the MH1 by Vestas – generates enough electricity in one revolution of the turbine blades to power a house for 29 hours. Production isn’t necessarily proportional with turbine size, but if it just happened to be – these 7MW units will generate 25 hours of electricity with a single rotation.

The project is being built by two ships. The first is what was (and might still be) ‘the most powerful heavy-life jack up vessel.’ The ship – Innovation – has a load capacity of 8,000 tons and can install in waters up to a 65 meter depth.