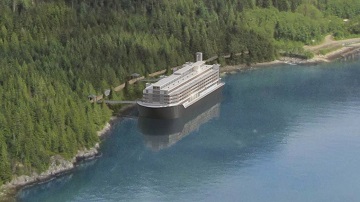 When construction workers arrive to build Squamish’s Woodfibre LNG plant, they may find themselves with a particularly good view of Howe Sound.

That’s because they could be floating in it.

Woodfibre has filed an application to amend its environmental approvals in order to permit a floating worker camp, or “floatel,” for the construction crews just offshore from the project site.

The self-contained facility would house between 400 and 600 workers, and feature an on-board kitchen, recreational areas, sewage collection tanks and garbage collection.

The company said it will recycle water, while power would provided through an existing BC Hydro hookup.

The company said using the floatel would also cut down on the amount of highway and marine traffic accessing the site.

Woodfibre president David Keane said the move was meant to address concerns the company had heard from the community about the strain housing workers might cause in an already tight housing market.

That’s a concern Squamish Mayor Karen Elliot said the district had made clear to Woodfibre.

“They thought they could house their workforce in our community, but by 2015 we had a zero per cent vacancy rate, and it’s been that way ever since,” said Elliot.

“This is something that is needed. There’s just no possible way to house hundreds of people in our community without displacing our residents.”

The Squamish Nation says it will be reviewing the application jointly with the province.

The Squamish have given the project, which is within their traditional territory, conditional approval pending it meets 25 conditions.

“We have our own specialists, experts in the fields of environmental aspects, some of the cultural aspects we’ll be looking at, and we have unique interests as a nation that we’re trying to protect that the province might not consider,” said Squamish Nation Coun. Khelsilem.

He said they will also be reviewing the floatel proposal in the light of concerns raised in Canada’s inquiry into Missing and Murdered Indigenous Women and Girls, which highlighted resource industry work camps as a source of risk.

“We’re going to be paying attention to ensuring that the highest standards are implemented in anything that happens within our territory,” said Khelsilem.

It’s not the first time floating accommodations have been used in B.C.

During the 2010 olympics, a cruise ship was used to house some event and security staff.

And in 2014, an 11-deck Estonian cruise ferry was brought to B.C., where it was renovated to house some 600 workers upgrading a smelter in Kitimat.

Watch the video on Global News