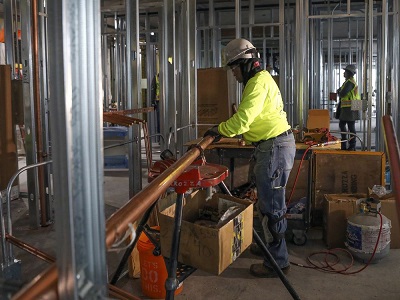 As reported in the National Post, Tameeka Gwyn is used to schlepping concrete weighing as much as 60 pounds (27 kilograms) around a construction site. For Janna Rojas, it’s a cinch to carry metal pipes as heavy as 100 pounds (45 kilograms) going into new plumbing.

“When you first do it, it’s quite a shock, but it’s reality,” says Gwyn, who with Rojas is helping build a high-rise for Manhattan’s Memorial Sloan Kettering Cancer Center.

They are some of the new faces of the 21st-century American construction worker — with women slowly making inroads in an industry still dominated by men. While there has been progress thanks to a rebounding economy, the federal Bureau of Labor Statistics found women represent only 3.4 per cent, or about 285,000, of the nation’s 8.3 million construction workers. Over the last decade, the total number of women in the construction industry has risen by about 31 per cent.

One program in New York City addresses the gender gap head-on, kickstarting recruits’ training while gaining a promise from unions to try to reserve 15 per cent of on-site apprenticeships for women. The Building and Construction Trades Council of Greater New York is working with a non-profit group, Nontraditional Employment for Women (NEW), which runs a pre-apprenticeship program for women who want to become plumbers, electricians, carpenters and members of other trades.

“We’ve had a real shift in terms of really working with the unions as partners in our work because they recognize that the need for a diverse workforce, a workforce that represents the population of New York City and beyond,” said NEW president Kathleen Culhane. She says they recruit trainees by distributing flyers at job fairs, community organizations and unemployment offices in addition to social media outreach.

It’s clear the industry has a long road ahead to even out its gender discrepancy — one that is hardly surprising for a job often characterized by male workers whistling at women who walk past job sites — despite a push from the #MeToo movement that is leading to sweeping changes in many occupations around the globe.