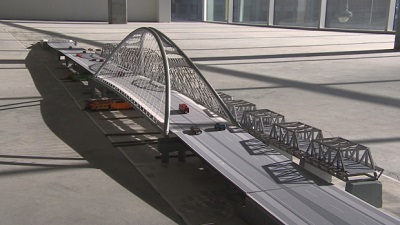 The replacement for Winnipeg’s Arlington Bridge could be completed as soon as November 2024 if city hall can cobble together $330 million worth of funding for the project.

The latest design for a new span over the CPR Winnipeg Yards will be unveiled to the public at an open house slated for 5 to 8 p.m. Thursday at the North Centennial Recreation and Leisure Centre (90 Sinclair St.).

The design preferred by city engineers encompasses a 550-metre bridge supported in the centre by a steel-tied arch that would rise 45 metres off the ground, City of Winnipeg bridge planning and operations engineer Darren Burmey said Wednesday in an interview at Stantec’s offices.

Engineers for the consulting firm, which acted as a design consultant on the project, showed off a seven-metre-long scale model of the proposed bridge.

The approaches to the new span would be less steep than the ramps on the existing Arlington Bridge. This would allow buses to use a bridge that would rise from Logan Avenue in the south to Stella Avenue in the north, passing over Dufferin Avenue — the northern terminus of the existing 106-year-old bridge, Burmey said.

The new bridge would also be three lanes wide, rather than the current two, but would be expandable to four lanes in the event McPhillips Street is closed for construction.