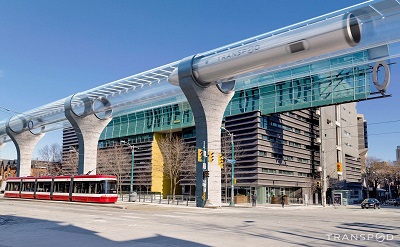 Will Canada be investing in Hyperloop transportation concepts in the near future?

As reported on DailyHive.com, the Government of Canada is officially looking into Hyperloop technology.

According to a Transport Canada tender, the government is requesting professional services for a transportation consultant to evaluate some of Hyperloop’s claims.

Hyperloop is described as a new intercity transportation concept and would see the time of a trip between Montreal and Toronto cut down to about 40 minutes.

“Promoters are engineering the design to provide travellers with a travel mode featuring very high speeds, fixed guideways above and below ground, and capsule-like vehicles called pods, propelled within a network of looped sealed partial-vacuum tubes,” reads the Request for Proposal (RFP).

“Promoters claim that this developing technology can be constructed and operated at a cost and installation footprint less than other existing technologies such as High Speed Rail or Maglev (magnetic levitation technology that uses two sets of magnets to elevate the train above the tracks and move it forward).”

Transport Canada is commissioning the study of the Hyperloop, so it can be “better informed on the technical, operational, economic, safety, and regulatory aspects of the Hyperloop and understand its construction requirements and commercial feasibility.”

The RFP also requests to look into the safety of the tubes, and Transport Canada hopes to have a “high-level overview” in the end.

The proposal does state that the Hyperloop technology is not yet proven but there have been a number of test facilities around the world that have been created to test the “Hyperloop theories of very low pressurized tubes, passenger capsules, elevation, propulsion, energy generation and distribution, and passenger ride quality.”

The government also says that the advantages of the Hyperloop system have not been tested in real world applications.