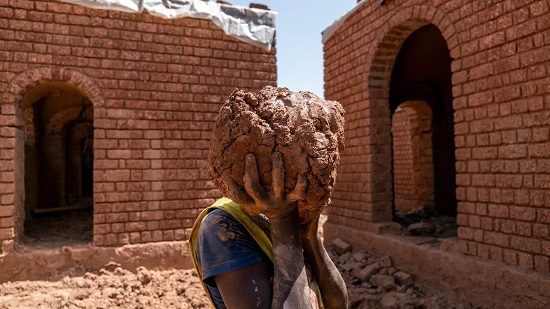 Why these West African architects are choosing mud over concrete

The traditional building material is cooler, cheaper, and requires less energy to make. But convincing villagers in Burkina Faso to stick with mud isn’t easy.

It’s 11 a.m. on a mid-May morning in the village of Koumi, Burkina Faso, and Sanon Mousa has almost finished the annual maintenance on his three-room house. He has replaced termite-ridden roof supports with freshly cut beams. He has applied a layer of reinforcing mud to the walls, some of which are a yard thick and more than 100 years old. After replenishing the thatch and sacrificing a goat to the memory of his ancestors, all that will remain is for his female relatives to apply layers of rainproofing to the exterior.

“The mud will keep us cool. The motor oil, clay, and cow dung will keep us dry,” Mousa says. “We’ve perfected this.”

Mousa, a 50-something retired school librarian with a slight paunch and a serious demeanor, is proud of his work. That doesn’t mean living in it is his first choice, though. When we met, two brothers in the village had recently been killed in their sleep when a mud wall collapsed on them.

In recent years, Mousa has watched as his wealthier neighbors, in this verdant strip of the country’s southwest, have rebuilt their own homes in concrete. He has smarted at what he sees as a symbol of his relative poverty. Despite considerable debt and consecutive failed harvests of the crops he relies on to pad his pension, he’s sorely tempted to borrow money and abandon mud.

Holding court inside a crumbling mud meeting house—and with Mousa sitting uncomfortably to his side—Sanu, the village chief, is furious.

“This is our heritage,” he says. “For thousands of years, these houses gave us a good life. Why would we change when we most need them?” He has mandated mud construction in the village core in a bid to preserve the old ways. But fewer and fewer people are abiding by his instructions. Painfully, that includes his own sons.

Keep reading on the National Geographic