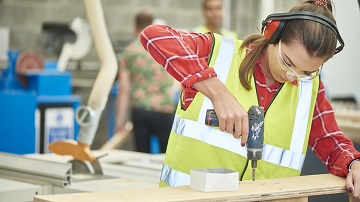 Why shouldn’t your kids consider a career in a trade?

Although the price of college is soaring and a four-year degree isn’t the guarantee of financial security it once was, 70% of parents surveyed by the National Center for Construction Education & Research (NCCER) said they wouldn’t advise their child to embark on a career in construction. They may want to rethink that.

Not only is there a dire need for the next-generation workforce in the construction trades, jobs are widely available and often high-paying. What’s more, training usually comes with no student debt.

Brian Turmail, vice president, public affairs and strategic initiatives at Associated General Contractors of America (AGC), says for decades, construction and trades jobs have been stigmatized and viewed as a “last resort, instead of a career opportunity that ought to be on the menu to be considered.”

Adds Turmail: “It’s been so impressed upon us that the path to success in the 21st century lies through a four-year traditional college education.”

But parents of teens and 20-somethings should understand that things have changed.

For one thing, the construction industry is desperate for builders, plumbers, electricians and others, because the field is aging. As boomers in construction retire, their jobs aren’t being filled quickly enough to meet the demand.

According to an AGC and Autodesk survey, 80% of construction firms are struggling to fill hourly craft positions, which make up most of the construction workforce. And they expect the problem to continue.

Helping to fill many job openings in the trades

Analysts predict more than 3 million skilled trade jobs will remain open by 2028. A recent survey by the National Association of Home Builders revealed that 69% of its members are already experiencing delays in completing projects on time due to a shortage of qualified workers.

It’s one reason why more than 60 organizations, led by home improvement retailer Lowe’s, recently launched Generation T, a movement to help fill the skilled trade gap and change public perceptions of the skilled trades in America. It’s creating a national marketplace to connect people to prospective apprenticeships and jobs.

Even with no experience, Turmail says, jobs in the trades are easy to come by.

“If you can pass a drug test, if you’re willing to work outside, willing to be part of a team and willing to show up early and work hard, you can find a job in construction in just about every market in this country,” he explains.

For example, the Generation T site forecasts more than 1 million opportunities for carpenters and nearly 650,000 for plumbers over the next decade.

Construction jobs are also becoming more tech-centric, which the industry hopes will appeal to a younger generation and their parents. iPads, drones and robots are regular fixtures on job sites, and some heavy equipment can be operated via GPS and a computer.