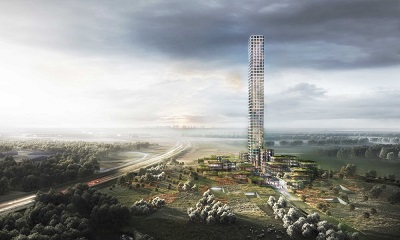 As blogged on New Atlas, planning permission has been granted for Western Europe’s new tallest skyscraper – though it’s not in London or Paris as you might expect. Instead, the destination for the Tower & Village skyscraper, by Dorte Mandrup, is a small rural Danish town called Brande with a population of around 7,000.

Assuming it is indeed completed, the Tower & Village skyscraper will rise to a height of 320 m (1,050 ft), making it taller than Western Europe’s current tallest skyscraper, London’s Shard, by a little over 10 m (32 ft). Though not a skyscraper, Paris’ Eiffel Tower is just slightly taller at 324 m (1,062 ft) and in Eastern Europe, Russia hosts the huge 462 m (1,516 ft) Lakhta Center, which is Europe’s tallest skyscraper and is rated at 13th place in the world’s tallest rankings.

From the renders provided, the tower looks rather slim and takes the form of a simple glass-and-steel rectangle. At its base will be a series of low and mid-rise buildings that are topped by green roofs.

The project is being commissioned by fashion giant Bestseller, which actually originates from Brande. The skyscraper will serve as the firm’s headquarters and, it hopes, prove a real boon to the town.

“With the Tower & Village project, Bestseller rethinks the classic idea of a headquarters and creates a long-term plan for the company’s presence in Brande,” says Bestseller Project Manager Anders Krogh. “We consider the overall building project an investment in Brande, and the planned high-rise building will function as an icon for the new expansion. It will be a landmark that places Brande on the map, but it will also function as an architectural attraction benefiting hotel guests, students and other users of the building.”

The team will be aiming for DGNB certification (a green building standard), though we’ve no more information on any sustainable features at this early stage.