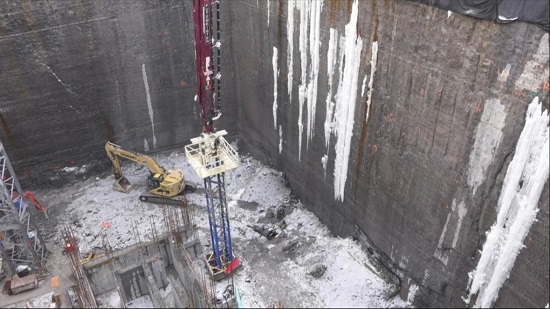 The chief operating officer of the development company behind the Claridge Icon condo project said, looking back, he sees areas of improvement on the site where Olivier Bruneau was killed by falling ice.

“This was a very atypical scenario. I mean, in hindsight a lot of things should have been done differently,” said Shawn Malhotra, the chief operating officer of Claridge Homes, at the inquest into Bruneau’s death.

While testifying Friday, Malhotra was pressed on the location of a snow safety fence that was set up weeks before Bruneau’s death in March 2016.

The fence was posted about four metres away from the south wall after fellow worker Anthony House was hit and bruised by a piece of falling ice.

According to an incident report, House was standing close to nine metres away from the wall when he was struck.

When asked why the safety fence was installed where it was, even though House was hit while standing even further away, Malhotra said that distance was believed to be safe.

“Obviously, we were wrong,” he said, adding in hindsight it probably wasn’t an adequate distance.

Although he didn’t visit the site during the winter, Malhotra said he frequently saw pictures of the ice on the wall and heard concerns communicated to the site supervisor.

At the inquest on Thursday, Mike Lwow, who was working as a site supervisor for Claridge Homes, said he called Malhotra on one of his first days working on the site because the ice was so worrying.