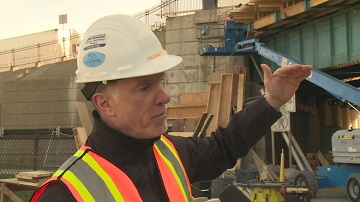 A group of about 30 people have spent the last three years reinforcing the 90-year-old Ambassador Bridge, as thousands of vehicles pass behind them and the daily life of those in Windsor, Ont. continues below.

Sorrel, standing beside the ramp portion on the Canadian side of the iconic Ambassador Bridge, said they love the job, but for some of his team — it took some convincing.

“Originally when we first got this project, they thought this was going to be a struggle: trucks going by them millimetres away from them — but these guys love the work,” said Sorrel.

Sorrel’s team is working away from the water, replacing steel joists and pouring concrete into a curb while replacing both the railing and lighting along the bridge.

“Things that are going to make this bridge last another 75 years,” said Sorrel, adding that the bridge is in “great shape” and essentially revamped from the water’s edge to the Canadian entry point.

The entire project has been underway while traffic carries on behind them, up to 8,000 transport trucks and 68,000 vehicles moving behind them daily, which can put a lot of pressure on the group.

The bridge is also shifting with the weight and wind while they’re doing the work.

Keep reading and watch the video on CBC News