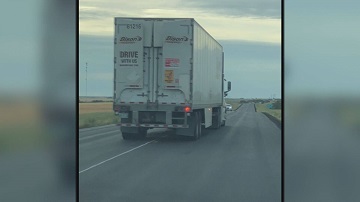 As reported on Global News, a close call was caught on camera on a southern Alberta highway on Tuesday.

Morgan Cartwright, who lives in Oyen, said she was riding shotgun with her boyfriend, travelling through a construction zone along Highway 9 just east of Cereal when a semi-truck tried to pass them but encountered oncoming traffic and pulled back in behind them.

When she saw the truck making another attempt to pass, still in the construction zone, Cartwright said she reached for her phone and started to record.

Cartwright’s video shows the semi passing their vehicle, only narrowly missing a head-on collision with an oncoming white car.

According to Cartwright, they were travelling around 80 km/h at the time, which was the speed posted in the construction zone.

“We passed plenty of signs that showed what’s going on and that they weren’t able to pass,” Cartwright said. “So I don’t know if the driver wasn’t paying attention to the signs or if he didn’t care. Either way, not good.”

Global News sent the video to Bison Transport, the Manitoba-based company that owns the semi seen in the video. The truck’s number is easily identifiable in the video.

“In this case, the operator of the unit in question is an independent contractor who was with us for a very short time. Bison takes matters of safety very seriously and our reputation and safety record supports that we are heavily invested in tools and training to support our professional drivers.”

Tuesday’s close call happened on the same highway that saw two deadly crashes within the last few weeks — one east and one west of Cereal.