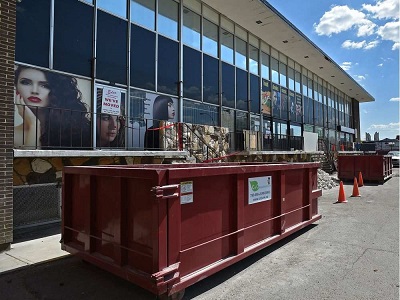 Ventures Building in Edmonton going under a major renovation

A well-known commercial building bookending a stretch of 107 Avenue is getting an overhaul.

The Ventures Building — a three-storey, 60s-era commercial building whose many tenants have included a hair salon, pizza parlour, barber shop, staffing agency, night club and accounting business — is getting a new facade as part of a major renovation.

The mid-century modern building currently features floating exterior staircases and brick, glass and stone facades. It has occupied a prominent spot at 109 Street and 107 Avenue since 1962.

While businesses have come and gone, the building itself has been virtually unchanged.

Shazad Mardhani, vice-president of asset management with Edmonton-based Imperium Developments, said the company acquired the building in December and hopes to finish work this summer.

He said he sees the building as a “bookend in that neighbourhood.”

Imperium plans to remove an entire floor of the building, bringing the main floor down to street level. That will reduce the total square footage to 16,000 from 24,000 and reduce the number of units to lease by one-third. The building was 50 per cent vacant when the company bought it.

A pharmacy and Irie Foods, a south-side Caribbean restaurant, are among the tenants confirmed for the building, Mardhani said.

The area, officially known as the Avenue of Nations, has long been home to communities of new Canadians.