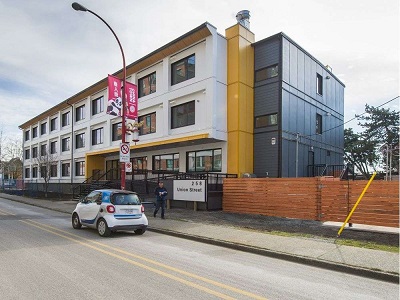 As Vancouver’s 600th modular home fills up, city looks for next 600

As reported in The Province, the city and the province, between them, managed to build Vancouver’s first 600 modular homes without a lot of support from the federal government. They’ll hope for more help on the next 600.

Sometimes, after a formerly homeless person has moved from living in parks, shelters or on the streets, and into a temporary modular-housing unit, they’ll sleep on the floor for the first little while.

“That’s because they don’t want to get comfortable in a bed, because they don’t believe it’s going to last,” said Tanya Fader, interim director of housing for the PHS Community Services Society, which operates four Vancouver modular-housing sites. “It’s not uncommon for someone moving in from a long history of being outside to not trust that it’s actually going to last, that it’s real, that it’s actually their home.”

Fader and others who work with residents of Vancouver’s modular-housing units hail the program as cost-effective for governments, fast to build and transformative for the lives of previously homeless tenants.

This week marks a milestone for Vancouver’s pre-fabricated homes, as residents move into the final of 10 sites, totalling 606 units, hitting the target set out at the program’s launch in September 2017. And while those tenants settle into their new homes, city staff are currently assessing possible sites for the next 600 modular homes. There’s little question the demand is there, in a city that counted 2,181 “residents facing homelessness” last year.

But even if the city figures out where to put those homes, the question remains of how to fund them.

Vancouver’s initial round of 600 units (after an earlier pilot project) received contributions from three levels of government. The B.C. NDP launched the program with an investment that ended up costing $80 million, and will provide another $11.4 million of operating funding this year. The 2019 provincial budget, released last month, included another $76 million for 200 more modular homes, but it’s not clear where in the province those homes will be built.

Keep reading in The Province