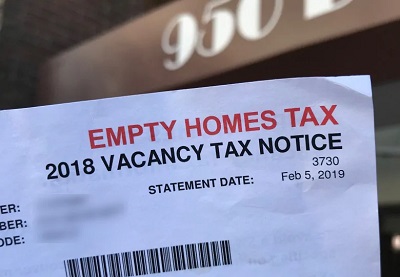 As reported on CBC News, when is a Vancouver home an empty home, even when it’s occupied?

When you decide to fight the fine for missing the city’s empty homes tax exemption deadline, and the city refuses to let you make a late declaration until the penalty is paid.

That’s the catch-22 Carolina Abramovich says she finds herself in.

She said she’s being billed $3,400 for having a vacant condo, even though she’s had tenants for 11 years — all because she’s fighting city hall over a $125 fine.

“There is an issue to me of bullying the little person,” said Abramovich. “[It’s] a completely real bureaucratic nightmare.”

Under the city’s empty homes tax, property owners are required to file a declaration every year, claiming non-primary residences are occupied.

Those claims are subject to a random audit.

Vancouver imposed the empty homes tax last year, in an attempt to discourage property speculators from buying additional homes, and then leaving them empty while the city suffers through an affordable housing crisis.

Abramovich is among almost 5,000 Vancouver property owners who missed the Feb. 4 deadline to claim an exemption and were assessed a $250 bylaw fine, which was reduced to $125 if they paid by the end of February.

The city says 3,022 homeowners have now paid the penalty, and approximately 300 who appealed the fines will be receiving decisions in the mail.

Abramovich said she received a call from city hall March 18 with bad news. Her appeal had been rejected.

She said she feels like she has a gun to her head: either pay the penalty for missing the Feb. 4 deadline, or the city will consider her condo to be vacant — despite the fact that it’s occupied by tenants.