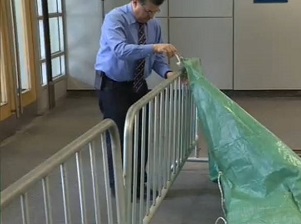 After last spring’s devastating floods across Quebec, one McGill University professor has pitched a new solution to the City of Montreal — one that he says is a faster and cheaper way to protect people’s homes.

Thousands of Quebecers surrounded their homes with sandbags last spring to brace themselves for floodwaters. This was the go-to protection method advised by the city.

But many people’s homes, especially those near bodies of water, were still damaged — so badly that nearly one year later, 77 families across the province are still being accommodated by the Red Cross.

According to Dr. Amar Sabih, a mechanical engineering professor at McGill, all you need to flood-proof your home is synthetic plastic tarp made of Polyvinyl chloride (PVC) and metal barriers commonly seen at outdoor events in the city.

“[Setting up the barrier] can be done in 10 minutes for 20 feet,” Sabih said. “So imagine we have a house. It can be done in less than two hours. Very easy.”

That’s much less compared to the time and effort needed to fill and stack hundreds of sandbags.

Sabih said the tarp will do a much better job of containing the water.