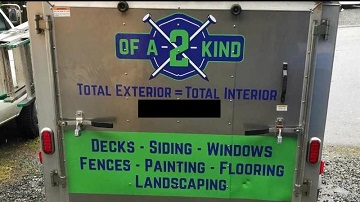 As reported on NanaimoNewsNow.com, complaints are piling up against an unlicensed Nanaimo contractor, including from a woman outraged by an alleged botched and incomplete exterior home renovation.

Jason William Coburn, owner and operator of 2-of-a-Kind Renovation, was brought to NanaimoNewsNOW’s attention after the harrowing plight of Maria Medeiros and her husband came into focus.

Medeiros claimed their newly-constructed second floor deck is unstable with a leaky roof. She feared the deck attached to the back of their Rosstown Rd. home will have to be torn down.

Coburn did not obtain a required permit from the City of Nanaimo to build the wooden deck when he was hired through an online ad in late May.

Medeiros said Coburn was paid $54,000 for the deck, new siding and windows. He allegedly completed roughly half of the agreed work but never returned.

“There’s always an excuse and he’s such a smooth talker,” Medeiros said. “I trusted him and I have a hard time trusting anybody now.”

Medeiros called dealing with Coburn “the worst experience of my life,” adding she’s overwhelmed with financial and emotional stress.

The closest she came to signing a contract with Coburn was an invoice describing what work would be done.

Medeiros is now in the process of filing small claims court action against Coburn in an effort to recoup the $24,000 she claimed to have lost.