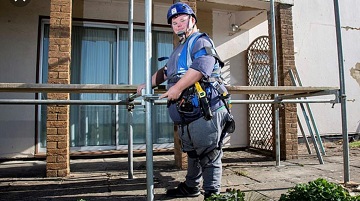 Swindon’s Todd Scanlon won a public vote for the 2019 On The Tools award after being nominated for overcoming his fear of heights, and for his boundless energy and commitment to learn new skills as part of his apprenticeship.

Todd said: “It feels great to win the award.

“I don’t really know why I won the award, people just voted for me to win.

“At the company I mainly do a lot of fittings and carrying.

“I wanted to go in to scaffolding because it’s my favourite thing to do.”

More than 4,500 people voted for the 30-year-old from Rodbourne to win the honour.

“He comes in every day and proves people wrong. Winning the award just shows he can do it.

“Having him on the site is great, he’s a good presence, all of the customers like him and he’s very polite.

“When we took him on we didn’t have any worries. I know his capability, but he is still proving to be better than whatever expectations we have. Everything you put in front of him he just does.

“I’m not sure why he won the award, but I think it’s mainly because it is thought people with a disability shouldn’t be in our industry.

“He’s just shown that you can do it with the right guidance. He’s just a likeable guy.”

Martyn, whose firm is based in Greenmeadow, is hoping Todd can be an inspiration to others.