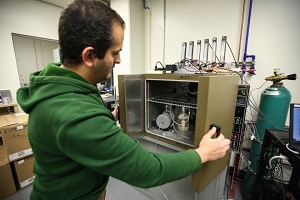 Turning carbon into concrete could win UCLA team a climate victory and $7.5 million

Gabe Falzone and his teammates had been up since 5 a.m., anticipating the arrival of the concrete mixer. When the truck pulled into the alley behind UCLA’s Boelter Hall, hundreds of narrow red cylinders stood ready. The engineers scrambled to fill the containers with roughly 8 tons of wet sludge before hustling them into giant ovens in the basement.

They had just 24 hours to complete the next task: bathing the concrete in carbon dioxide to lock away the gas in the world’s most widely used construction material. This was the critical step in the semifinal challenge of a contest with a $7.5-million payout.

“It was down to the wire,” said Falzone, a project scientist at the Westwood campus.

The UCLA team is one of 10 vying for the NRG COSIA Carbon XPrize, an international competition to see who can turn the most CO2 into valuable products.

The idea is gaining momentum as a promising climate solution. Called carbon utilization or carbon conversion, it involves taking CO2 emitted by power plants, steel factories, breweries and other industrial facilities and converting it into something practical — and profitable — rather than letting the greenhouse gas escape into the atmosphere.

“It’s very hard to incentivize people to just do things out of altruism,” said Emily Carter, an expert on sustainable energy technologies at UCLA. But “if people can make money,” she said, “it’ll happen without government intervention.”

Studies suggest that, in a best-case scenario, converting carbon into useful goods could mitigate 1% to 15% of global emissions, and a 2019 report by the National Academies of Science, Engineering, and Medicine affirmed that it could help tackle climate change by turning a pollutant into profit.

“It almost sounds too good to be true,” said Marcius Extavour, executive director of the Carbon XPrize contest.

Researchers have spent decades studying how to capture CO2 from sources like coal plants so they could pump it into deep geologic formations, where — hopefully — it would stay put for centuries or longer. There’s just one problem, Extavour said: “It doesn’t make anybody any money.”

So scientists started exploring ways to turn CO2 into things people were willing to pay for.

Some are piping it into greenhouses to nourish plants, or using it to grow algae for biofuels and animal feed. CO2 already serves as a raw ingredient for many industrial processes, and researchers are developing techniques to incorporate recycled carbon into materials like plastics, polymers, nanotubes — even vodka.

These uses provide an alternative fate for the gas, which would otherwise warm the planet. CO2 is the primary driver of human-caused climate change and the culprit behind ocean acidification.

To halt these trends, society will have to drastically reduce its production of greenhouse gases. But in the meantime, carbon utilization could put some of that CO2 to work.

“There’s an opportunity to really make the circular economy happen,” said Jennifer Dunn, a chemical engineer at Northwestern University who contributed to the National Academies report. With each of these new approaches, “we’re making a usable product.”