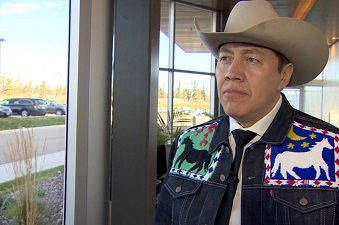 The Tsuut’ina nation has filed a statement of concern with Alberta Environment over planned berms along the Elbow River that will form part of the Bragg Creek Flood Mitigation Project being built by Rocky View County.

A study prepared for the First Nation west of Calgary says the berming could negatively impact the reserve — during both normal flows and flood events — and affect water quality at the Redwood Meadows treatment plant.

Spokesman Kevin Littlelight says the federal government needs to step in, and the First Nation wants to be consulted on the project.

“We want the best for our neighbours at all times, Bragg Creek especially,” he said. “They’re right there, we’ve been partners for a very long time. We want them to be safe. But someone else’s safety doesn’t mean the demise of your neighbour.”

Littlelight says the Tsuut’ina Nation has not yet discussed their concerns with Rocky View County.

Officials there say they’ve always followed a “good neighbour” policy in their dealings with the many municipalities and First Nations peoples who share their borders.

In a statement, Rocky View County spokesman Grant Kasier said officials were only made aware of the Tsuut’ina concerns through media reports.

“We have been in contact with the Tsuut’ina and had planned to begin engagement sessions with them on April 30,” he said in a statement.

“Until we have seen the documents filed by the Tsuut’ina, and had the chance to discuss the project with the First Nation, we can offer no further information at this time.”

Construction of the $33-million project is scheduled to get underway in the fall.