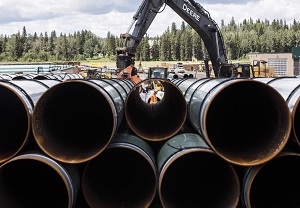 While construction around Edmonton has yet to begin on the Trans Mountain Pipeline expansion, hundreds of workers have already been hired to help bring the project to life.

As of Sept. 30, Trans Mountain Corp. (TMC) announced on social media that contractors have hired more than 2,200 people to work on the project, including heavy equipment operators, tradespeople, engineers and construction managers.

In an email statement to Star Edmonton, TMC said that since construction on the project restarted two months ago, work is underway at the Burnaby and Westridge terminals on the West Coast, and at pump stations in Alberta.

Surveying and staking crews were active and in the field in the greater Edmonton area last week, the crown corporation revealed on Twitter, preparing the right-of-way for work in the area.

“Construction is expected to begin shortly in the Edmonton area,” the statement read. “Our contractors have been ordering and receiving equipment, surveying and staking and doing everything possible to be ready to start construction in the other areas as soon as possible.”

Members of the Building Trades of Alberta (BTA) — which, according to its website represents more than 60,000 members from 18 Alberta skilled trade unions — stand to benefit from jobs created due to the pipeline’s construction.

While the figure fluctuates according to how many contractors are scheduled to work, BTA executive director Terry Parker said about 30 per cent of the workforce involved in Alberta construction of the project could come from workers represented by the BTA.

Even though jobs associated with installing the pipeline are temporary, Parker noted, completion of the project comes with more long term work.