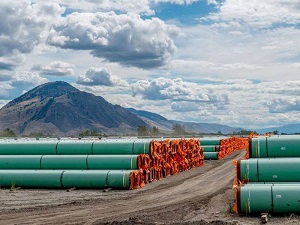 Trans Mountain construction set to begin in Alberta before Christmas

After years of delays, pipeline construction is ready to begin on the Trans Mountain expansion project.

Large-diameter green pipes that will carry oil from Alberta to the British Columbia coast have been stockpiled at various points along the path of the Trans Mountain expansion project since the summer. The Financial Post has now learned that crews are preparing to start construction work on the controversial pipeline in Alberta.

Trans Mountain spokesperson Ali Hounsell confirmed there would be “pipe on the ground” with the intention of putting “pipe in the ground before Christmas.” She said an event was planned for Tuesday to mark the beginning of right of way construction on the pipeline project.

The Trans Mountain expansion project is considered critical infrastructure for landlocked oil producers in Alberta keen to expand their customer base beyond the United States. The 590,000-barrels-per-day expansion would raise the pipeline’s capacity to 890,000-bpd, enabling more shipments to Asia’s energy-hungry markets.

In June, the Financial Post reported that large stockpiles of green-coated pipelines have been amassed at yards in the B.C. towns of Vavenby, Hope and Kamloops, and preparatory work has been ongoing in Valemount.

Crews have also been working for months at the Westridge marine terminal in Burnaby, B.C. where oil from the Trans Mountain pipeline will eventually be loaded onto ships for export.

“We have received more than half of the pipe needed for construction and are staging it at storage yards along the route,” the company had told the Financial Post in an email in November, adding that the 2,200 workers had already been hired. “Our contractors have been ordering and receiving equipment, surveying and staking and doing everything possible to be ready to start construction in the other areas as soon as possible.”

Over 90 per cent of Canada’s oil exports — oil and gas is the country’s largest export category — are currently shipped to the United States, with the majority of those exports going to the U.S. Midwest refining markets. The Trans Mountain pipeline offers much-needed diversification for the industry.