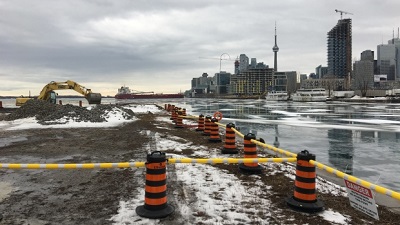 Redevelopment of Toronto’s port lands district is a BIG deal for the city. This prime real estate along the shores of Lake Ontario and the plans for the project will keep Toronto in the forefront of being one of the great cities in the world for many years to come.

A bleak jetty covered today in a mix of ice and mud could become one of Toronto’s top parks by the spring of 2020, after construction work on the Port Lands officially began on Thursday.

The work, taking place on the eastern waterfront just off Cherry Street, will take years. The plan is to fill in one channel of water and part of another, creating a nine-hectare (20 acres) park that will anchor the future neighbourhood.

Once finished, the park will have an unobstructed view of the city skyline — one similar to a spot that’s already a favourite among photographers — and anchor a brand new neighbourhood.