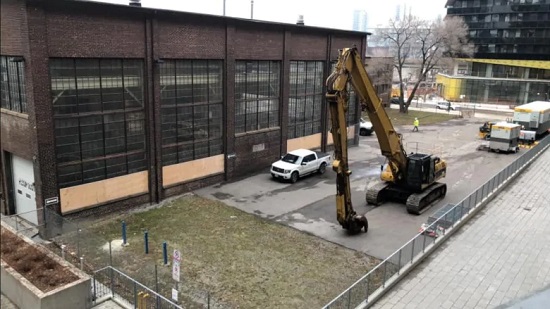 Some Toronto residents are demanding that the Ontario government scrap plans to demolish heritage buildings on the West Don Lands downtown.

The Dominion Wheel and Foundries Company site, at 153 to 185 Eastern Ave., is a provincially owned property now subject to a Ontario ministerial zoning order issued in October. The order, one of three for the West Don Lands, paves the way for housing construction and allows the province to bypass planning processes, including public consultations.

The four buildings on the site were constructed between 1917 and 1929 and were added to the city of Toronto’s heritage register in 2004.

Friends of the Foundry, a newly formed group that advocates for local planning, is urging the government to work with the community to find an alternative to demolition and preserve the site.

Heavy equipment and a demolition crew appeared at the site on Thursday. Crew members told residents they have been told to clear the site by March.

The province did not consult the community, did not notify the local city councillor or MPP and is not considering any community feedback, the group says.

“Today, the Province has once again used secrecy and the cover of a provincial emergency to begin demolition of the Foundry. It has done this without any consultation, disclosure of a disposition plan, consideration of adaptive reuse or even a courtesy call to the City and community leaders,” the group said in a news release on Friday.

According to the group, the Dominion Wheel and Foundries buildings were part of a complex that manufactured equipment for railways in the first half of the 20th century.