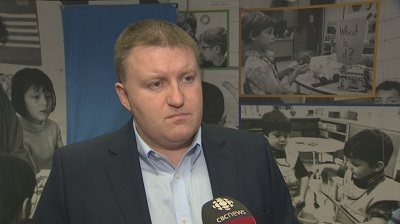 The Toronto District School Board says work “has been paused” on a construction project at Palmerston Avenue Junior Public School after a piece of scaffolding fell on a student on Monday morning, CBC Toronto has learned.

The girl was outside the school, located near Palmerston Boulevard and Bloor Street West, when a piece of construction material fell and hit her in the head.

Ryan Bird, spokesperson for the TDSB, told CBC Toronto the girl was immediately brought inside, that her mother was called, and that she was taken to see a doctor.

“We understand that she’s going to be fine,” said Bird.

Parent John Burridge, who has a son and a daughter at the school, says he arrived just after the incident occurred and saw the young girl “upset and crying,” with blood coming out of a gash in her head.

Burridge said the construction, which is a renovation project on one of the school’s two buildings, had caused him concern in the past.