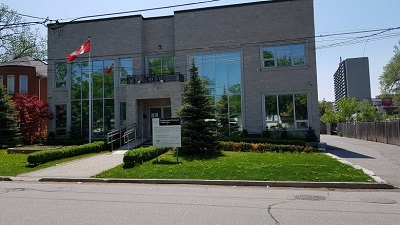 A North York optometrist and his wife are in hot water with the city, after they erected a two story medical office building —  complete with its own pharmacy, eyewear retailer and doctors’ offices — on a lot that was meant for a single family home.

City staff and Coun. David Shiner, who represents the area, maintain the couple signed an oath promising to build only a single family dwelling on the lot.

Instead, they erected an office building.

Mansoorifar says the building now houses six doctors and a foot clinic. As well, it has its own pharmacy and an eyewear retailer.

A staff report to council Wednesday also accuses the couple of “paving the entire back yard in order to provide additional parking.”

Mansoorifar also told CBC Toronto Wednesday she knows the building doesn’t match the residential zoning. But neither do other lots on adjacent streets, she said.

“But really what I need right now is help. Please Mr. Shiner don’t close this office,” she said.

She says the clinics now serve 35,000 patients, and forcing them to close would be a hardship to the community.

She also said it would put about 20 doctors and employees of the clinics out of work.

But Shiner says that volume of clients on a residential street is part of the problem.

“It’s exactly the reason they shouldn’t be there,” he told CBC Toronto Wednesday. “Why should there be an office with thousands of patients every day, when they could be around the corner where it’s permitted?

“They knew from the very beginning this was illegal.”

The story began in 2009 when, according to a report to council, the couple applied for a building permit, which the city was reluctant to issue out of concern that the planned structure could be used for commercial purposes.

In exchange for a permit, the couple “both signed affidavits under oath that they only intended to use the building as a residential single family detached dwelling.”